Dabeli or kutchi dabeli is a popular snack food of India, originating in the Kutch or Kachchh region of Gujarat.

It is a spicy snack made by mixing boiled potatoes with a special dabeli masala, putting the mixture in a ladi pav (burger bun), and serving it with chutneys made from tamarind, date, garlic, red chilies, etc. It is garnished with pomegranate and roasted peanuts.

On average, 20 lakh dabelis are consumed daily across Kutch.

Dabeli literally means "pressed" in Gujarati language. It is said to be invented by one Keshavji Gabha Chudasama alias Kesha Malam, resident of Mandvi, Kutch in the 1960s.

When he started business he sold a dabeli at one anna or six paisa. His shop is still there in Mandvi and business is now carried by his next generations.

Dabeli today is famous not only in Kutch and Gujarat but also throughout Maharashtra, parts of Telangana, Karnataka, Rajasthan and many other States of India.

Other common names for Kutchi Dabeli are Kutchi burger or Desi burger and Kutchi double roti or "Kacchi Dabeli".

Dabeli is very popular street food in India and is enjoyed equally by all the age groups. It tastes super, has a spicy tangy flavour.

I firstly tried Dabeli in Pune, Maharashtra. I liked it so much and missed this snack a lot as I couldn't find dabeli masala at grocery shops and I shifted to another city, where dabeli is not available. So one of my friend taught me this recipe when she got to know all this. She also taught me how we can make dabeli masala at home. Also gave me some homemade dabeli masala so that I can have it anytime.

So sharing this recipe with all of you to try and enjoy.

For the Potato Masala 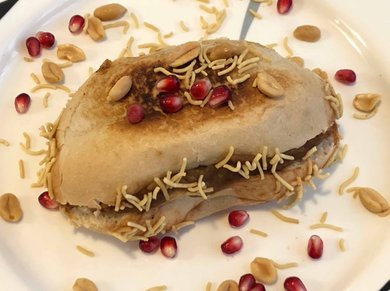 To assemble the Dabeli: