Pesto pasta is a traditional Italian food, served in almost every Italian restaurant. Pesto, sometimes spelled as pasto or to refer to the original dish pesto alla genovese, is a sauce originating in Genoa, the capital city of Liguria, Italy.

The name is the past participle of the Genoese verb pestâ (Italian: pestare), which means to pound, to crush, in reference to the original method of preparation: according to tradition, the ingredients are "crushed" or ground in a marble mortar through a circular motion of a wooden pestle. This same Latin root, through Old French, also gave rise to the English noun pestle.

Strictly speaking, pesto is a generic term for anything that is made by pounding; that is why the word is used for several pestos in Italy. Nonetheless, pesto alla genovese ("Genoese pesto") remains the most popular pesto in Italy and the rest of the world.

Pesto is traditionally prepared in a marble mortar with a wooden pestle. First, garlic and pine nuts are placed in the mortar and reduced to a cream, then the washed and dried basil leaves are added with coarse salt and ground to a creamy consistency. Only then is a mix of Parmigiano-Reggiano and Pecorino added. To help incorporate the cheese a little extra-virgin olive oil is added. In a tight jar (or simply in an air-tight plastic container), covered by a layer of extra-virgin olive oil, pesto can last in the refrigerator up to a week, and can be frozen for later use.

Pesto is commonly used on pasta, traditionally with mandilli de sæa ("silk handkerchiefs" in the Genoese dialect), trofie or trenette. Potatoes and string beans are also traditionally added to the dish, boiled in the same pot in which the pasta has been cooked. Pasta, mixed with pesto, has become a well-known dish in the majority of countries today, with countless recipes being posted online for "pesto pasta".

For reasons of expense or availability, walnuts, pecans, cashews or even peanuts are sometimes substituted for the traditional pine nuts. Also, while the nuts are traditionally used as is, some recipes call for prior toasting. While not preferable, other culinary nuts may be used due to the taste disturbances that some people may experience after consuming pine nuts (see pine mouth). Many online recipes in English for pesto will also list black pepper among the ingredients, which the traditional Genoese recipe omits.

You can use any pasta type like penne, spaghetti, linguine, rigatoni etc in pesto pasta. Before serving you may garnish it with some fresh basil leaves and some cheese.

Earlier I used to buy pesto from the market but once I tried at home, everyone liked it so much that I started preparing pesto at home. It is very easy to make and you can store it for a week. And yes fresh pesto taste super yummy. 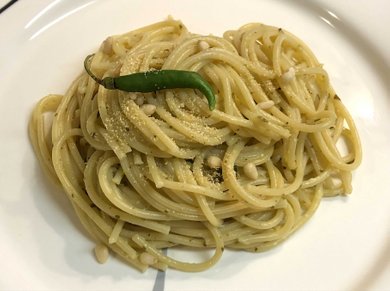