Basundi is an Indian sweet mostly popular in Gujarat, Maharashtra and in some parts of Karnataka.

It is a sweetened condensed milk made by boiling milk on low heat until the milk is reduced by half.

It is a traditional dessert that is made during the festivals like Diwali, Bhai dooj, gudi padwa and also on special occasions.

It is an easy to make dessert but a little time consuming.

Different styles of basundi are also prepared, such as sitaphal (custard apple) basundi and angoor basundi (basundi with smaller kinds of rasgullas).

In North India, a similar dish goes by the name rabri, however the texture and consistency is different from basundi. Basundi is served chilled, often garnished with slices of almonds and pistachios to give it a nice crunch.

Basundi can be served with pooris. 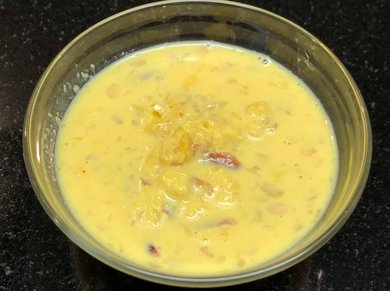