Rasmalai, also known as Rossomalai, is a dessert originating from the Bengal region in the eastern part of the Indian subcontinent. The name ras-malāi is the Hindi cognate which comes from two words in Bengali: rōś, meaning "juice", and mālāi, meaning "cream". It has been described as "a rich cheesecake without a crust". The sweet is of Bengali origin; according to K.C. Das Grandsons, it was invented by K.C. Das.

Ras malai or rasmalai consists of white, cream, or yellow coloured flattened balls of chenna soaked in malai (clotted cream) flavoured with cardamom. The balls are cooked in sugar syrup and milk with saffron, pistachios and kheer as stuffing.

Homemade ras malai is usually made from powdered milk, all-purpose flour, baking powder and oil, which are kneaded to form a dough, moulded into balls, and dropped into simmering milk cream.

Rasmalai is usually served chilled. It is one of my favourite Indian sweets. Rasmalai taste best when it is chilled overnight. As the balls soak the milk and all flavour get intermixed well in 8-10 hours. So to serve the next day, make them a day in advance.

To make rasmalai balls the milk is first boiled and then curdled by adding lemon juice or vinegar. After draining the water from the curdled milk, the thing that is left behind is called the chenna or the paneer. This chenna/paneer is then mashed until it becomes smooth. Then small balls are made from that chenna and dropped into the boiling sugar syrup till it gets cooked.

To make the thickened milk or the ras into which the rasmalai balls are finally dipped and chilled before serving, full fat milk is boiled till it thickens slightly. It is then flavoured with saffron and cardamom.

My husband and I have sweet tooth, we love Indian sweets a lot. Here we are not getting every Indian sweet, so we thought to try this at home and it came out super delicious on our first try to make rasmalai. Now we can make them whenever we want to, we just need to have the ingredients. 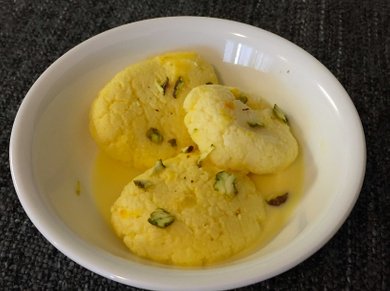