Poori (also spelled puri) is an unleavened deep-fried bread, originating from the Indian subcontinent. It is usually served with a savory curry or bhaji, as in Puri bhaji, but may also be eaten with sweet dishes.

In some parts of India, puri is also served with a mixed vegetable dish that is prepared during Puja. Puri is also eaten with sweet accompaniments, such as kheer (a dessert prepared with rice, milk and sugar) or halwa (in Hindi-speaking regions of India, the expression "Halwa puri khana", "to eat puri with halwa", signifies a celebration - of possibly modest means). Puri is often the bread of choice for festivals and special occasions.

In the South of India, puri is almost always made for tiffin, and on the east coast (Andhra, Tamil Nadu) it's rarely eaten with non-vegetarian dishes. Often, they will be served with pickles, chutneys, dal masalas, potato masala, or gourd curry.

Puri is most commonly served at breakfast. It is also served at special or ceremonial functions as part of ceremonial rituals along with other vegetarian food offered in prayer as prasadam. Puri is often the bread of choice for festivals and special occasions.

Puris are prepared with wheat flour, either atta (whole wheat flour), sooji (coarse wheat flour) or, most commonly, maida (refined wheat flour). In some recipes, ajwain or cumin seed is added to the dough. The dough is either rolled out in a small circle or rolled out and cut out in small circles, then deep fried in ghee or vegetable oil. While deep frying, puris puff up like a round ball because moisture in the dough changes into steam which expands in all directions. When they are golden-brown in color, they are removed and either served hot 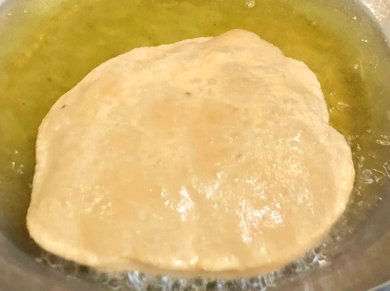