Kadhi pakora or karhi pakora is a dish originating from the Indian subcontinent. Kadhi Pakora is one of the popular dishes of Punjab, northern India.

It consists of a thick gravy based on chickpea flour (besan), and contains vegetable fritters called pakoras, to which dahi (yogurt/curd) is added to give it a bit of sour taste. It is often eaten with boiled rice, jeera (cumin seeds) rice, paratha or roti.

My family loves to have kadhi pakora with either plain or jeera rice, onion salad and some pickle or green chillies. Sometimes kadhi is also made without pakoras. Kadhi Chawal (rice) is one of my favourite dish. I also like kadhi with plain paratha.

It's also a good option for tiffin/lunch box, or you can have kadhi pakora for lunch or for dinner.

In India, kadi is made in different ways, different states have their own version of kadhi. For example, in northern India, pakoras are added to the chickpea gravy and sour yogurt is added to add flavour to it. They are eaten either with boiled rice or roti.

In Rajasthan and Gujarat, it is usually served with khichdi, roti, paratha or rice. It is considered a light food. Rajasthani and Gujarati kadhi differs from the Uttar Pradesh variety. Traditionally, it is sweeter than the other variants, because sugar or jaggery is added to it, but it can be made without sugar for a more sour taste. It is eaten without pakoras and its consistency is slightly thinner.

The Gujarati kadhi is made preferably from buttermilk as it gives a more smooth texture compared to yogurt. Variations on this basic dish includes the addition of certain vegetables, notably bhindi (okra) in which case it is known as bhinda ni kadhi.

In Punjab Kadhi is a simple, quick winter meal. Made from besan (also known as chickpea flour or Gram Flour) to thicken the consistency, and adding pakoras, it is eaten with either long grain basmati rice or, (more commonly) with a roti. Unlike the rest of India, sour yoghurt is not added, just full-fat buttermilk, or unsweetened yoghurt.

The Sindhi diaspora in India usually make kadhi by first roasting the chickpea flour and adding vegetables to the chickpea gravy. It is called Kadhi because of the use of Curry Leaves which are called "Kadhi Patta" in Sindhi. Instead of yogurt, tamarind pulp is used to give it a sour taste. An alternate way is to make a liquid mixture of the chickpea flour instead of roasting chickpeas.

Sometime potato can be added in kadhi, I had such type of kadhi in a Gurudwara Sahib in India, there kadhi is served always on Sunday as langar. 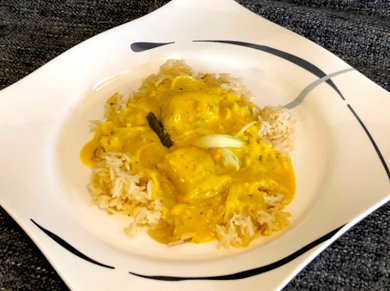