Halwa is any of various dense, sweet confections with roots in West Asia (Levant) or the Indian subcontinent. It is also served in the Caucasus, North Africa, the Horn of Africa, the Balkans, Eastern and Western Europe, Malta and in the Jewish diaspora.

In some Indian cultures, the dish is known as a soup-based sweet. Identical sweets exist in other countries, such as China, though these are not generally referred to as "halva".

In global, popular usage it means "desserts" or "sweet", and describes two types of desserts:

This type of halva is slightly gelatinous and made from grain flour, typically semolina (suji- India). Its primary ingredients are clarified butter (ghee), flour, and sugar.

This type of halva is crumbly and usually made from tahini (sesame paste) or other nut butters, such as sunflower seed butter. Its primary ingredients are nut butter and sugar.

Halva may also be based on various other ingredients, including beans, lentils, and vegetables such as carrots, pumpkins, yams and squashes.

Halva can be kept at room temperature with little risk of spoilage. However, during hot summer months, it is better kept refrigerated, as it can turn runny after several days.

Suji Halwa also known as Semolina halwa or Rava halwa, is usually made with wheat semolina, sugar or honey, and ghee or butter or vegetable oil. Raisins, dates, other dried fruits, or nuts such as almonds or walnuts are often added to semolina halva.

The halva is very sweet, with a gelatinous texture similar to polenta; the added butter gives it a rich mouth feel.

The semolina is sautéed in the fat, while a syrup is made from the sweetener and water. Then the two are mixed carefully while hot, and any extra ingredients are added. At this point, the halva is off-white to light beige, and rather soft. Depending on recipe and taste, it can be cooked a bit further, which makes it darker and firmer, or left to set as is.

It's easy to make and requires few ingredients. In some states of India it is served in breakfast or as an evening snacks. 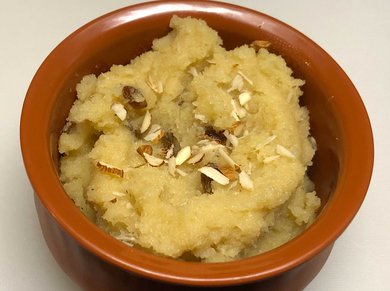