Vada Pav, alternatively spelt Vada Pao, Wada Pav, or Wada Pao, is a vegetarian fast food dish native to the Indian state of Maharashtra. The dish consists of a deep fried potato dumpling placed inside a bread bun (pav) sliced almost in half through the middle. It is generally accompanied with one or more chutneys and fried green chillies.

It originated as cheap street food in Mumbai, but is now served in food stalls and restaurants across India. It is also called Bombay Burger in keeping with its origins and its resemblance in physical form to a burger.

Vada comes from the Marathi compound word batata vada, which means "potato fritter". Pav is a derivative of the Portuguese word "pão", which means bread.

Boiled potato is mashed and mixed with spices, usually with green chilli, garlic, asafoetida, turmeric, and mustard seeds. The mass is then coated in gram flour batter and deep fried. The resultant fritter is served in a bread bun, accompanied by one or more chutneys and fried green chilli.

Vada pav is a yummy snack. I had it firstly in Pune, India. There was a famous vada pav stall near to my office, my friend and I used to go there and had vada pav with Indian tea (chai). It was normally our evening snack.

There was also a popular vada pav stall near to my hostel, it was operated by a family (husband and wife) and that was one of the best vada pav's I had there I Pune. They served Vada Pav with fries green chillies and ginger chilli chutney.

Vada Pav is one of my favourite snack, I can have it anytime. I started preparing vada pav at home. It's very easy to cook this yummy snack and it goes very well with hot chai (an Indian tea). Also you require few ingredients to prepare this super delicious snack.

I missed Pune as I tried many yummy snacks there. Some are Dabeli (Kacchi Dabeli), Vada Pao, Mastani, Ghee Roast Dosa and many more. And whenever I prepare Vada Pav all my beautiful memories from Pune gets refreshed.

You can have vada pav as breakfast or as an evening snack. It's loved by my whole family. 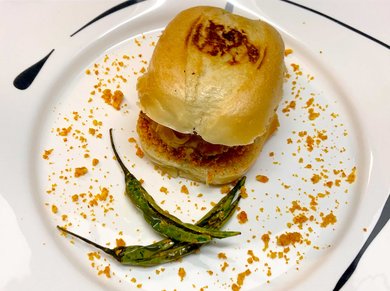 To Make the batter:

To fry the vadas

To fry the Green Chillies

To assemble the Vada Pav