Kachori is a spicy snack, originating from the Indian subcontinent, and common in places with Indian diaspora and other South Asian diaspora, such as Trinidad and Tobago, Guyana, and Suriname. Alternative names for the snack include kachauri, kachodi katchuri and fried dumpling.

Kachoris were popular in old Delhi and Kota, Rajasthan, even before samosas gained popularity after the partition of India.

Kachori is supposed to have originated in Uttar Pradesh or Rajasthan. In these states it is usually a round flattened ball made of fine flour filled with a stuffing of baked mixture of yellow moong dal or Urad Dal (crushed and washed horse beans), besan (crushed and washed gram flour), black pepper, red chilli powder, salt and other spices.

Additionally in Rajasthani cuisine, the Pyaaj Kachori (onion kachori) is very famous. Another form of Kachori in Jodhpur is the Mawa Kachori and is a sweet dish dipped in sugar syrup.

In Gujarat, it is usually a round ball made of flour and dough filled with a stuffing of yellow moong dal, black pepper, red chilli powder, and ginger paste.

In Delhi it is often served as chaat. Delhi also has another kind of kachori, called Khasta kachori or Raj Kachori.

A variant includes sweet upwas (fast) kachori, made with potato, coconut, and sugar. Kachoris are often served with a chutney made from tamarind, mint, or coriander. Another type is fried and stuffed with pulses (urad and moong especially) and is generally found in the Kutch region of Gujarat. A kachori stuffed with peas is a delicacy in Bengal.

Some of the variants in North India include a version similar to the Rajasthani one, accompanied by a curry made of potatoes and varied spices or even chana (chole) similar to one served in chole bhature.

It can be served in breakfast or as an evening snacks.

Here I am sharing yellow moong dal (Yellow Petite Lentils) kachori which is one of my favourite.

To make Stuffing for Kachoris 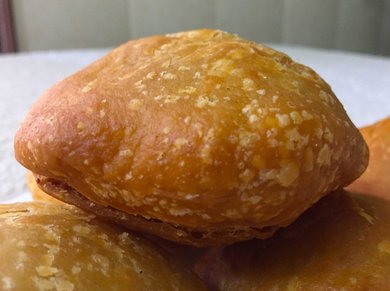 To make dough for Kachoris

To make stuffing for Kachoris