Sambar, also spelled sambhar or sambaar, is a lentil-based vegetable stew or chowder cooked with a tamarind broth originating from the Indian subcontinent. It is popular in South Indian and Sri Lankan Tamil cuisines.

According to food historian K. T. Achaya, the earliest extant mention of sambar in literature can be dated to the 17th century. According to a story, the dish was accidentally invented by the Maratha ruler Sambhaji, who added tamarind while making dal soup, when his head chef was away.

Sambar is made either exclusively with one of these vegetables or a combination of them:

Sambar is reflective of a broad and ancient tradition of lentil-based vegetable stews in southern India. In regions that grow coconuts, notably some areas of Kerala, coastal Karnataka and Tamil Nadu, Sambar is made with a paste of fresh, grated and roasted coconuts and spices, instead of sambar powder.

In Andhra Pradesh, it is called as Pappu chaaru. Apart from dal and tamarind, vegetables used in preparing is few. Vegetables are onions, dosakaaya, bitter gourd and tomatoes.

Sambar is usually served with steamed rice as one of the main courses of both formal and everyday south Indian cuisine. A two-course meal of sambar mixed with rice and eaten with some sort of vegetable side dish, followed by yoghurt mixed with rice, is a prime southern Indian staple.

Vada sambar and idli sambar are popular for breakfast or an evening snack in the south Indian states.

Sambar is also served as a side dish for dosa. 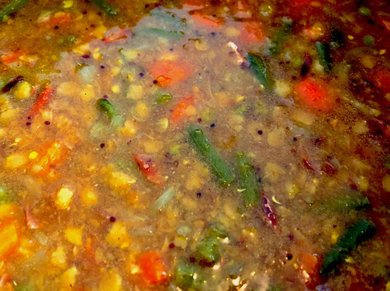