Mix vegetable curry is an Indian dish comprising of different vegetables like cauliflower, potatoes, green beans (french beans), carrots, capsicum (bell peppers), green peas, mushrooms etc. You may use any vegetables of your choice and taste.

It is cooked in different ways in India and also in different parts of India. This dish comes with two versions - one with gravy and one without gravy. It is a healthy and delicious dish and easy to cook.

Mix vegetable curry with garlic naan or plain naan is one of the dishes that we cook usually to celebrate some special occasion. This is a dish quite popular not only among vegetarians but also among non vegetarians.

I learned this dish from my husband. Whenever he asks me how should we celebrate an occasion, I smiles and says you cook your special mix vegetable curry and we will have it with naan or garlic naan.

Garlic Naan is a leavened, oven-baked flatbread found in the cuisines of the Middle East, Central Asia and South Asia.

It can be used to scoop other foods or served stuffed with a filling. For example, keema naan is stuffed with a minced meat mixture (usually lamb or mutton or goat meat); another variation is peshawari naan. Peshawari naan and Kashmiri naan are filled with a mixture of nuts and raisins.

Here the dish, I am sharing, is the north Indian version of mix vegetable curry and garlic naan. 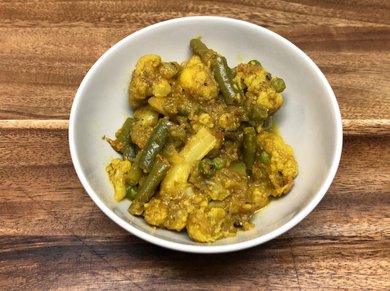