A pakoda, bhaji, bhajji, or bajji is a spicy Indian snack or entree dish similar to a fritter, with several variants. It is also a popular snack food in Kerala, Tamil Nadu, Maharashtra, Andhra Pradesh, Karnataka, Assam, West Bengal and Odisha in India, and can be found for sale in street-side stalls, especially in tapris (on streets) and dhabas (on highways).

Pakodas are very crisp on the outside and medium soft to crisp inside. They are dipped in a batter made from gram flour (also known as chickpea flour or besan) and then deep-fried. The most popular varieties include pyaaz pakora (onion pakoda also known as pyaaz bhajji) - made from onions, and aloo pakora (potato pakoda) - made from potatoes.

You can enjoy hot and delicious onion pakodas or onion bhajji with hot Indian tea (chai), as an evening snacks or tea time snacks. In some states of India, pakodas are also served as breakfast.

In India when it rains in the evening, people make pakodas and enjoy it with hot Indian tea as evening snacks.

Pakoras are usually served as a snack or appetiser. They are also often served with Masala chai to guests arriving to attend Indian wedding ceremonies, and are usually complemented with tamarind, chutney or raita.

In the United Kingdom, pakoras are popular as a fast food snack, available in South Asian restaurants.

Onion bhajjis are often eaten as a starter in Indian restaurants before the main course, along with poppadoms and other Indian snacks. They may be served with a side of salad and slice of lemon, or with mango chutney, and are traditionally made to a mild taste. 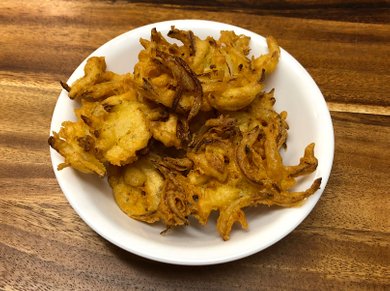 To make the batter:

To make the Onions Pakodas or Onion Bhajjis or Pyaaz bhajjis