Paneer naan bread is a type of bread made with flour and stuffed with paneer (cottage cheese). It is a flatbread that is baked in the oven. Naan bread often looks like a tear drop but can have different shapes also. It is often covered in herbs and spices to change the taste.

Paneer naan bread, sometimes also known as cheese naan, is made from basic bread ingredients like all purpose flour (maida), yeast, salt, and butter or ghee. It also is made with yogurt and milk. The yogurt is what makes naan bread taste so much different than other kinds of bread.

Paneer naan with gravy is my all time favourite dish and is one of the popular north Indian dishes. I firstly had it in a restaurant in Chandigarh, India. I loved it so much that my mother tried it at home and that was more delicious than the restaurant one. So I got this delicious recipe from my mother.

Paneer naan is delicious in taste, easy to make and goes very well with gravy and some onion salad, chutney or pickle. The gravy is a silky, buttery, creamy tomato based gravy, which is normally base for many Indian curries.

The gravy that is usually served with paneer naan, is made of onions, tomatoes or tomato puree, ginger, garlic, cream and with some Indian herbs and spices.

The naan can be made on tawa or in an oven (or tandoor), but the one I shared here is oven version of paneer naan. 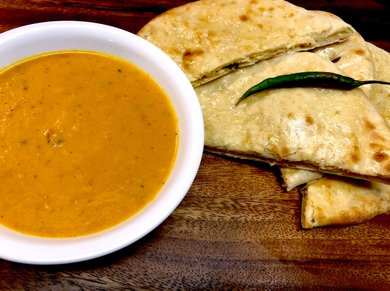 Prepare the dough for the Paneer Naan

Prepare the filling for the Naan