Garlic Naan is a type of naan, leavened, oven-baked flatbread found in the cuisines of the Middle East, Central Asia and South Asia.

Garlic naan bread is a type of bread made with flour and topped with garlic and may have herbs. It is a flatbread that is baked in the oven. Naan bread often looks like a tear drop but can have different shapes also. It is often covered in herbs and spices to change the taste.

Naan bread is made from basic bread ingredients like wheat flour, yeast, salt, and butter or ghee. It also is made with yogurt and milk. The yogurt is what makes naan bread taste so much different than other kinds of bread.

Typically, it is served hot and brushed with ghee or butter. It goes well with Indian curries. 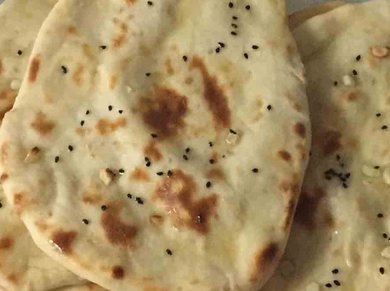