Tandoori roti also known as tandoor bread is a type of leavened bread baked in a clay oven called a tandoor, similar to naan.

In the Indian subcontinent, tandoori rotis or tandoor breads are popular especially in the Khyber Pakhtunkhwa, Gujarat, Jammu and Kashmir, Rajasthan and Punjab regions, where naan breads are baked in tandoor clay ovens fired by wood or charcoal. These tandoor-prepared naans are known as tandoori naan.

Tandoori roti is also known as taftoon, and it is commonly consumed in South Asian countries such as Iran, Pakistan, and India as the main wheat-based product. This bread is served in restaurants, hotels, industrial canteens, and home. It is also gaining popularity in the continents of Asia and Europe.

Cooking food in tandoori oven has been around for about five millennia. Remains of the clay oven has been excavated in the Indus River valley, present-day Afghanistan, Pakistan, northwest India, Iran, and Central Asia.

Because of the growing inaccessibility of a tandoori oven in urban areas, especially in cities outside of Southern Asia, people have developed ingenious techniques to replicate the cooking process and the food without the use of the oven. Common alternatives include an oven or a grill fuelled by charcoal or wood so the food will be infused with the smoky flavour.

You can make tandoori roti in oven or on tava at home. You can brush it with butter (butter tandoori roti) or without butter (tandoori roti or plain tandoori roti). It's easy to make and can be served with any Indian gravy, e.g with mix vegetables gravy, matar paneer or you can serve with non veg dishes, e.g. Butter Chicken, Tandoori Chicken gravy etc.

Tandoori bread is made by kneading flour, active dry yeast, salt, and water together until the dough becomes uniformly firm into a disc of 2-3 mm thickness, 15-20 cm diameter and a weight of 50-60 grams.

I am here sharing with you the recipe of baking tandoori roti in an oven.

It is one of my family's favourites bread and we normally have it to celebrate something or when we wanted to have something different and delicious food. 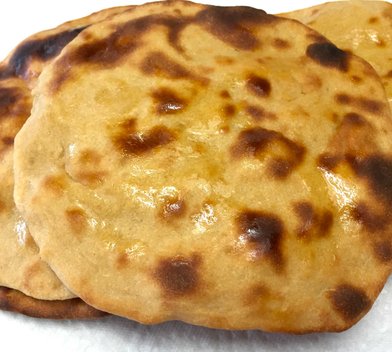