Chocolate brownie commonly referred to as simply brownie, is a square shaped, baked, chocolate dessert. Brownies come in a variety of forms and may be either fudgy or cakey, depending on their density. They may include nuts, frosting, cream cheese, chocolate chips, or other ingredients.

A variation made with vanilla rather than chocolate in the batter is called a blonde brownie or blondie. The brownie was developed in the United States at the end of the 19th century and popularised in the U.S. and Canada during the first half of the 20th century.

Brownies are typically eaten by hand, often accompanied by milk, served warm with ice cream (a la mode), topped with whipped cream, or sprinkled with powdered sugar and fudge. In North America they are common lunchbox treats and also popular in restaurants and coffee houses.

Its name came from its dark brown colour. It tastes like a cross between a cake and a cookie. It is normally served cut into squares or rectangles. It can be eaten as a snack, or with ice cream or whipped cream as a dessert.

I started baking cakes and cookies at home, as my husband does not eat eggs and here we could not find any eggless cakes, brownies etc. These Eggless Brownies are amazingly delicious, fudgy brownies. My husband loved them so much, so do I.

Eggless chocolate brownies can be easily baked at home and taste super delicious. We bake brownies normally on some special occasions, to celebrate special days. This is a perfect dessert for the vegetarians. 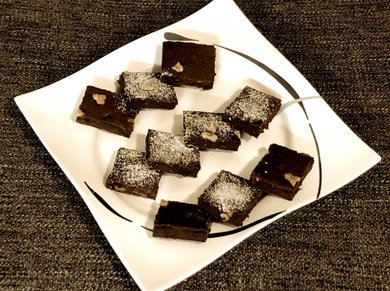