Medu vada is an Indian fritter made from Black lentils (urad dal). It is usually made in doughnut-shape, with a crispy exterior and soft interior.

A popular food item in the South Indian and Sri Lankan cuisines, it is generally eaten as a breakfast or a snack. "Medu" is the Kannada word for "soft"; "medu vada" thus literally means "soft fritter".  The dish is often mentioned simply as "vada" on menus.

The medu vada is made primarily of black lentils (urad dal) batter. The black lentils are soaked in water for several hours, and then ground to a paste. The paste may be flavoured with other ingredients such as asafoetida, methi seeds (fenugreek), ginger, cumin seeds, black pepper, curry leaves, chillies and coconut pieces. It is then patted into doughnut-shapes and fried in oil until golden brown.

One variation involves baking instead of frying. Other variations of the dish involve use of pulses other than black lentils. For example, am-bada (or aama vadai) is made with chana dal (split chickpea lentil); occasionally, tuar (pigeon pea) and masoor (lentil) are also used.

The dish is usually served with sambar (lentil and vegetable stew) and coconut chutney. Along with idli, it is often eaten as a breakfast. It is also eaten as a lunch starter or a snack.

The medu vada is sometimes also served with yogurt, as a chaat snack (dahi vada). 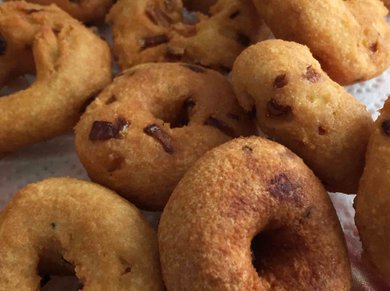