Sarson Da Saag also known as Saroon Da Saag, is a popular vegetarian tradional dish from the Punjab (both the Pakistani Punjab and the Indian Punjab) and Rajasthan regions of the Indian subcontinent.

It is made from mustard greens (sarson) and Indian spices, ginger, garlic, onions, tomatoes etc. It is often served with makki di roti.

The dish is regarded as the traditional way to prepare saag and is usually served with makki di roti (literally "unleavened cornbread". It can be topped with either butter (unprocessed white or processed yellow butter) or more traditionally with ghee (clarified butter).

Some spinach (called palak in Hindi) may be added to enhance colour and thicken the dish, though this may alter the flavour. Also added some bathua, sarson greens, onion, tomato and all ground spice.

Mustard is a winter and spring delicacy, and its relative abundance in Punjab, Rajasthan, and North-East has made it one of the most popular dishes in those regions.

Literally, makki di roti means "bread of maize" in the Punjabi language. Makki di roti is yellow in colour when ready, and has much less adhesive strength — which makes it difficult to handle.

Makki di roti is generally made during winter in Punjab and is often accompanied with saag (especially sarson da saag i.e. cooked mustard green leaves), makkhan (butter) and buttermilk. Similarly, in Himachal and Punjab, it is eaten with saag and also Maah (Urad) daal.

Makki is Roti and Sarson da Saag is a popular traditional dish of Punjab and is made in almost every home in Punjab. I learned this dish from my mother, she cooks delicious Sarson da Saag and Makki di Roti. Whenever I visited her in winters, she made this dish for me, as she knows this is one of my favourite dishes.

I personally like to have it Makki di Roti and Sarson da Saag with yogurt (curd), daikon (radish) salad and green chillies or red chilli pickle.

Ghee or Butter - as per taste (optional) 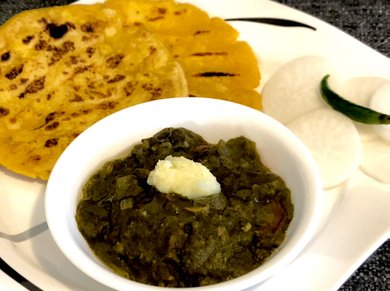