Laddu or laddoo are sphere-shaped sweets originated in the Indian subcontinent and Nepal. Laddus are made of flour, ghee/butter/oil and sugar, with other ingredients that vary by recipe, like chopped nuts or dried raisins. They are often served at festive or religious occasions.

Common flours used for laddu include gram flour (chickpea flour), wheat semolina and ground coconut. These are combined with sugar and other flavourings, cooked in ghee and moulded into a ball shape.

Some laddu recipes are prepared using Ayurvedic medicinal ingredients, including methi laddu, multigrain and resin laddu. Nuts such as pistachios and almonds are commonly stuffed into laddus.

Besan laddu is a popular Indian sweet dish made of chickpea flour (also known as besan or gram flour), sugar and ghee. Besan is roasted in ghee till golden brown appearance with nutty fragrance. Then sugar is added to it. Pistachio pieces are also mixed in this mixture optionally. Sweet balls are then made from this mixture. It has a long shelf life. It is often served at festivals, family events and religious occasions in India.

Laddu is often prepared for festivals or family events such as weddings and births, or given as a prasadam (religious offering of food) at Hindu temples, especially at Venkateswara Temple, Tirumala, Andhra Pradesh, it is famous with the name Tirupati Laddu. Laddu is considered a traditional Eid dessert in some Muslim communities.

In Maharashtrian cuisine, there are traditional recipes for laddu intended as travel provisions.

Since then we used to make besan laddoos at home. 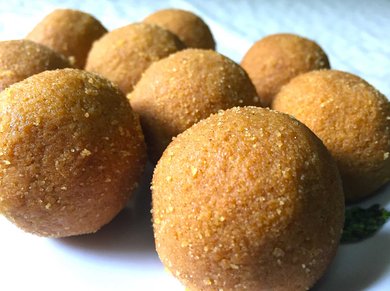